Stamps of the Arabian Nights, Part 18

Modes of Transportation in Popular Culture, 2008

In 2008 Guinea produced a sheet of stamps celebrating methods of transportation in popular culture (moyens de transports dans la culture populaire.)  This sheet features six different stamps and references a variety of well known fairy tales and stories.  P. Puvilland is the designer. For our purposes, two stamps are of interest.

Ali Baba and the Forty Thieves

Ali Baba and the Forty Thieves.
I’m guessing that transport by donkey is being illustrated here.  On this stamp we see Ali Baba leaving the thieves cave with a donkey loaded down with treasure.  This must be an incident that happens after all of the thieves have been killed.  Prior to that time, Mr. Baba was pretty circumspect with his plundering of the plunder, especially as he knew that the thieves knew that he knew about the treasure. 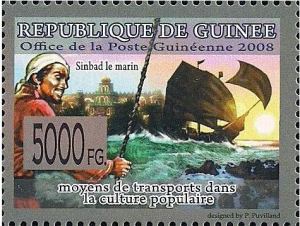 Aladdin only gets an honourable mention, with the lamp being illustrated in the lower corner of the sheet.  He does not get his own stamp.  A Magic Lamp is not what I would have considered as a means of transportation, but I suppose one could look at it that way.  You have no control over your destination though.

The theme of the collection is a different one and the execution is a bit puzzling.  I am familiar with all of the stories illustrated.  The Lockheed P-38 Lightning, referenced in the top of the sheet is not from The Little Prince (although Asteroid B612 is.)  Instead, I believe that it is supposed to  represent the plane in which the author of The Little Prince, Antoine de Saint-Exupéry, was shot down in during World War 2.  Thus, an inauspicious means of travel.

The inclusion of Dorthey, in the form of Judy Garland, from The Wizard of Oz is different.  Travel by tornado is one method of getting around, but not recommended.  Le petit Poucet is known as Hop-o’-My-Thumb in English.

The Republic of Guinea is situated in west Africa.  France colonized the area in the 1890’s, making it part of French West Africa.  In 1958 Guinea declared its independence.  Since then, a continuous series of autocratic rulers has made Guinea one of the poorest countries in the world.